Just because we were not raised in, or have moved away from the country of our heritage, does not mean we are lost. It doesn’t mean we have forgotten who we are and where we are from.

We still belong… We just belong to more than one…This is o.k.

“We are all influenced by the wonder, beauty and ways of many cultures. We are richer and prouder for it.”

OK. So, the quote above? That is something I wrote a while back and it is central to what Dinky Mix is all about.

My cultural identity is something that has had a great impact on how I define myself. It’s not just skin colour and hair type. It is so much deeper than that. It’s the way of dressing, the food I eat. It’s the intangible things. The stories passed down from my older relatives. It’s the language used, the idioms and proverbs that some members of my family throw out. I mean, anyone heard the ‘what concerns a monkey with a toothbrush’ one???

Apparently, that means it’s none of my business, so I’ll leave it alone!

That’s the type of thing I’m talking about.

It’s the generations of traditions passed down that make me, me.

I also think the culture of the place or places I was raised in are part of this. Although those traditions in my case may not be as deeply ingrained as the generational ones, they still play a part in my self-definition. When speaking with family and friends, I’ve found cultural identity to be a subject that brings out a whole load of feelings and emotions in relation to connections, foundations, and self-worth. They ranges from tragic to absolutely hilarious.

The whole idea of ownership, belonging and home in regards to culture is something that resonates strongly with me. It was something I struggled with at a much earlier age. I am British born Igbo Nigerian, and I remember from a young age being taught about my Igbo heritage, I loved being taught about it, my Mum and Dad would refer to Igboland as being my ‘home’. This was at a time when I had never been there and didn’t even know what it looked like. At that age, my understanding was, because that’s where my parents are from, then that’s where I belong, and I truly loved the feeling of belonging, but I wasn’t living there.

I was born, raised and living in the U.K in the 80s, dealing with the almost weekly occurrence of outright rejection of racism, felt while being raised in a country different to that of my parental heritage. It’s easy to see why as a primary school age kid I ended up almost disowning my Britishness. It was a rebellious ‘if you don’t want me here, I don’t want you, and it doesn’t really matter cos ‘home’ is Nigeria anyway’ kinda thing. But that came from a place of hurt.

I was born and raised in Manchester, England. But my Igbo name, my skin, my hair was unaccepted and ridiculed, Everything about me was excluded from the mainstream and made to feel abnormal unless it was to reinforce a negative stereotype or to keep you in the acceptable if you’re black box. Sometimes I didn’t feel like I belonged anywhere.

I look back on it now, knowing that those similar to me go through this or similar. However, at the time I felt so lost. It was a very confusing time.

Friends who have a multi-racial or multi-heritage background also expressed similar feelings to me. It wasn’t just me, it seemed it was more common than I had imagined.

I think we can agree that even though sometimes we want them to ‘get lost’ (in the nicest and safest possible way of course!). Lost isn’t one of the feelings that we aim to nurture when raising our precious cherubs. I certainly didn’t want my kids to feel the same way I had during my childhood. I didn’t want them to be overrun by the negative stereotypes that are readily available for them in the media. Or to be upset by the erasure of their skin tone or their culture in vast areas of life.

I wanted them to be able to imagine and see themselves as the princess, the superhero, the fairy, or even the adventurer. With that in mind I decided to create illustrations that represented them culturally and racially, and that didn’t cram them headfirst into a gender-stereotyped box. In fact, superheroes were the subject of Dinky Mix’s first illustrated art print range. My daughter, who at the time would happily wear her full Batman costume through every walk of life, shouting “I’m Batman” at unsuspecting passers-by, was the inspiration.

My kids absolutely loved the illustrations, and was I’m happy that was the case, but really that wasn’t enough for me.

I wanted my kids to see the good and the beauty in EVERYTHING they are.

Whether it pertains to beauty standards, career or the ability to imagine the impossible, I needed my children and others like them to understand that they are part of it, and every part of their being is valuable. Every part that makes them ’them’ is worth so much. Their skin colour, their hair texture, their accent, their languages. ALL OF IT! All the cultures that they are part of belong to them. They are not one or the other. They are all, and how they wish to express it is solely their call and nobody else’s.

If other ‘people’ don’t understand them, or simply don’t want to, that’s not their problem. After all, ‘what concerns a monkey with a toothbrush’? Right?

This was the main driver for starting Dinky Mix, a brand that allowed me to follow my passions of design and illustration, while being able to fulfil the dream of giving little ones everywhere the three little gifts that Dinky Mix has become known for, and what I needed when I was a little girl. The gifts of pride in cultural heritage, a positive self-identity, and a sense of belonging. 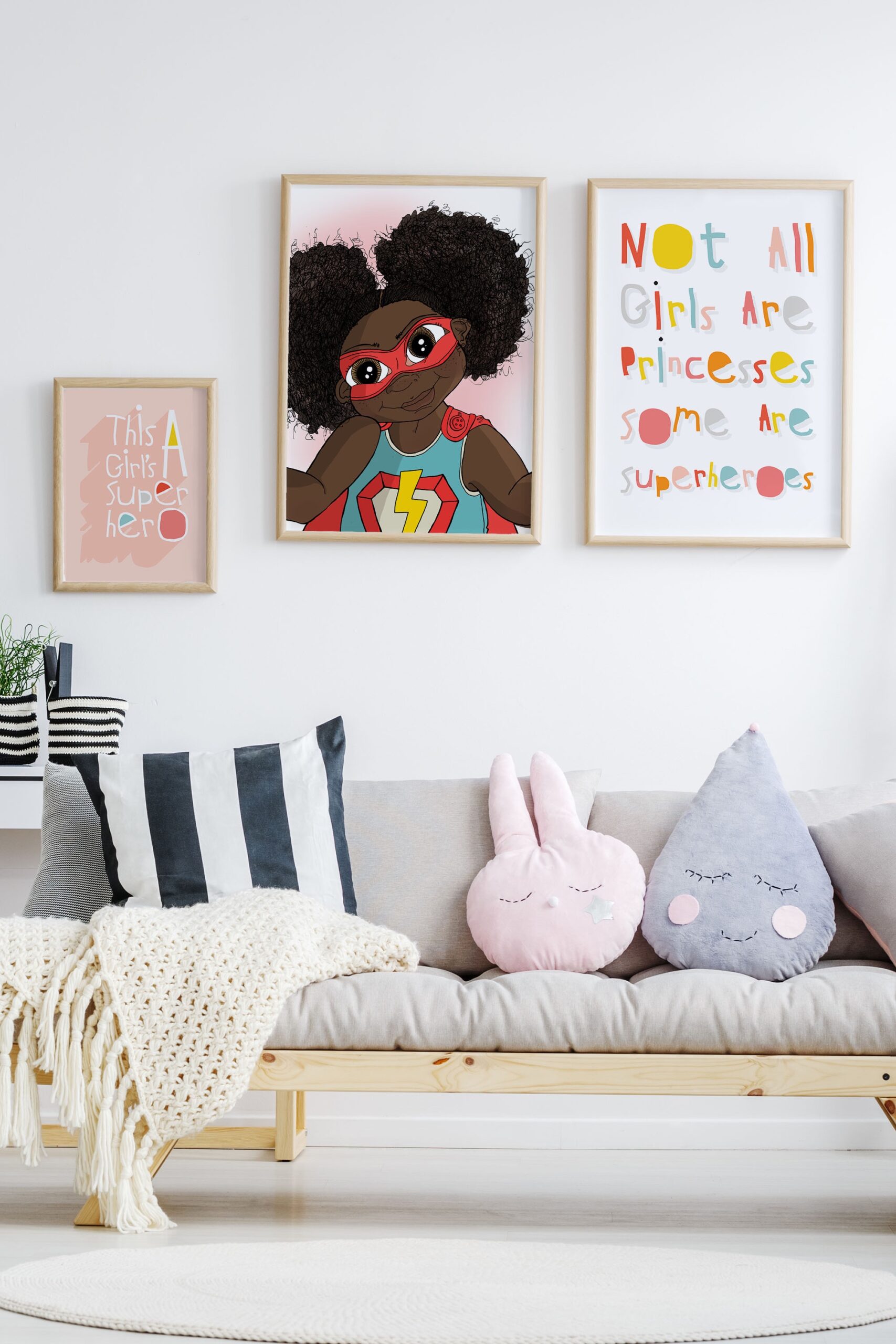 I want all children to feel included wherever they find themselves. To see themselves portrayed in a positive light. To be proud to share their beautiful heritage with other kids and welcome all who want to enjoy it with them. I want them to share and to be interested in others. Celebrating the differences as well as the similarities of the vast array of people, cultures, and races that reside on this amazing planet.

I want them to understand that with all the different cultures and races that they encounter there is a common thread. Humanity. And this is where we all belong.

I would love for them to grow up to be the leaders and decision makers that make a difference and make this world a better place… That would be cool, and that is the reason for Dinky Mix.