Autumn is well and truly underway. For me, this calls for leafy walks, chunky jumpers, cosy blankets and hot chocolates. I sometimes think I should have been a bear in a previous life. The idea of binge eating, followed by hibernation sounds like a dream come true. But as the nights are drawing in and it’s darker and colder, others might begin to struggle.

Seasonal affective disorder (SAD) is a form of depression that comes and goes throughout the year, and is triggered by the changing seasons. SAD is more commonly seen in the autumn/winter, but can also affect people in spring/summer.

Most of us might get the ‘winter blues’ at this time of year, but SAD is the next level. It can be debilitating to an individual and impact their ability to function on a day-to-day basis. Any sense of motivation and enjoyment seem at an all-time low, and it shouldn’t be dismissed as just a bad few days. Symptoms might also become more severe as the season progresses. Some might also experience alternating emotions season to season – manic highs one season, followed by manic lows the next. This sounds like one big never ending rollercoaster of continuous symptoms to me!! 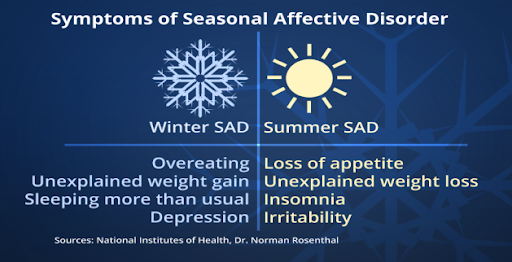 One of the main symptoms you’ll see with SAD is a change to sleeping and eating patterns, whether this is an increase or decrease. This can be a bit of a viscous circle, and have a further knock on affect to an individual’s mood.

Factors that can have an impact on a person and their SAD, is their location, and if there is a history of depression. For example, those who live in warmer climates are less likely to be affected by SAD than those in colder climates. The amount of sunlight exposure can affect serotonin and melatonin levels, which influence a person’s mood and sleep.

SAD needs to be taken seriously. As with other types of mental illness, if left to fester, it can take hold of a person and affect all aspects of their life. A whole season is a long time to be struggling too.

As with anything, acknowledgement is the first step. Self-care is important at any time of year, but especially if you feel like you’re beginning to suffer.

Some people dislike the thought of taking medication, but it doesn’t have to be anti-depressants. As a common trigger is to do with levels of light/sunshine, an effective way to help give yourself a boost could be taking vitamin D and/or melatonin supplements, which we would naturally otherwise get from being exposed to sunlight. This could be done alongside using a light box. By sitting in front of this for a set amount of time each day, this mimics natural sunlight, helping to change chemicals in the brain that regulate your mood. 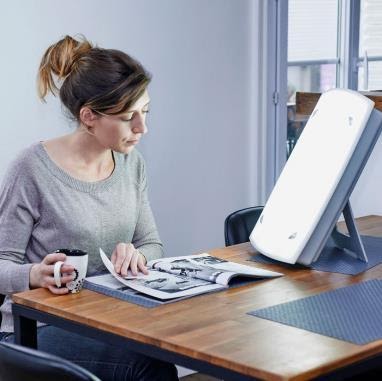 It’s also good to try and reframe your thinking, by trying to see the season as an opportunity, instead of a hardship. What can you only do during that particular season? By trying to make the most of it and embracing it, you allow yourself to be present in the moment, instead of wishing it away longing for the next season. And we all know a watched kettle takes longer to boil. You may not miss it when it’s gone but you don’t need to hide from it either. Happiness can be found, we just need to be on the lookout for it ☺

I know this is easier said than done. It doesn’t matter what it is that you do, it’s all about putting yourself first. We worry so much about looking after others, that we forget about our own needs.

It is estimated that up to three in 100 people in the UK are affected at some point in their life. Whilst it’s more common to occur during the autumn/winter months, it can also happen in spring/summer. Whenever it occurs, it’s important to acknowledge it and to be kind to yourself.