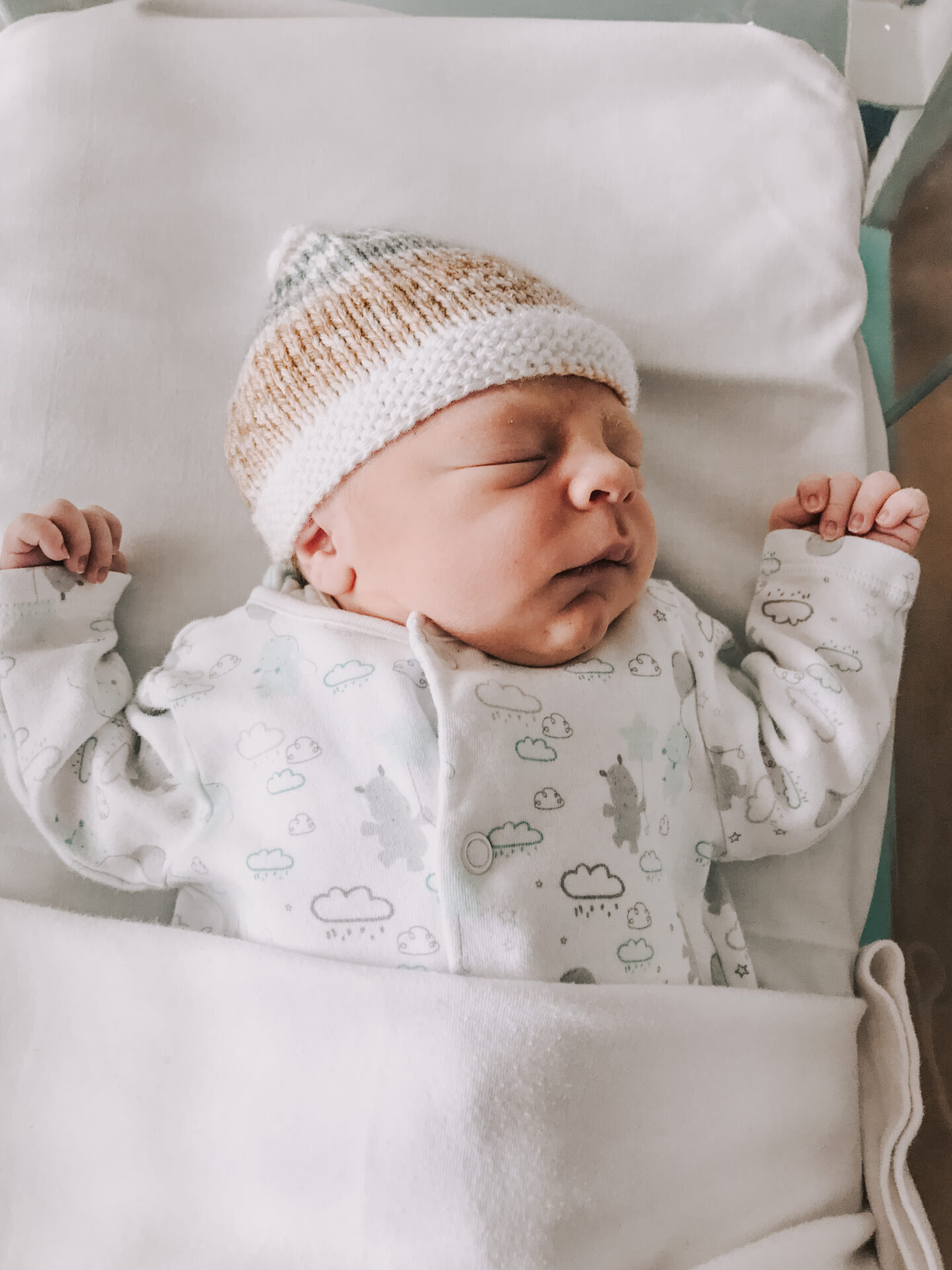 Oliver Hudson arrived on the 18th February 2020 at 8am, weighing 7lb 1oz. He was two days early and boy was he in a rush. I always knew I was going to share my labour & delivery story on here, just as I shared Teddy’s but since the boys deliveries safely into the world were so vastly different I want to share it even more! It is so important to share my positive birth story, especially after such a traumatic one with Teddy (55 hours of back to back labour, theatre for forceps & a haemorrhage). When people tell you every birth is different, they really aren’t lying and I am a prime example of that! I’m still in shock almost 12 months later…

I had absolutely no inkling that baby would be arriving; nothing. I went bed on Monday the 17th February without a care in the world at around 10/11pm. I then was woken up at 1am with “belly ache” – first instinct was oh I’ve been pretty constipated (standard) so just need the toilet. Did my business and got back in bed.. a few minutes later.. the same thing so off I went to the toilet and did more of my business. Repeat for an hour! I then accidentally woke Aaron up and said I had belly ache, but I didn’t think it was anything.

After about two hours the pains were coming every 6-7 minutes but still.. did I think I was in labour? LOL NOPE. Just had the shits obviously. I actually blocked the toilet at one point which is exactly what you need at 4 in the morning!

By this point I was in a LOT of pain. They were really low down, not across my belly or back as they were with Teddy so I thought something was wrong, but did I think I was about to give birth? STILL NO. Babies don’t come early. No. Especially not my baby. They’ll be late like their brother. Yep.

I tried implementing my hypnobirthing breathing I had been practicing each night but I couldn’t concentrate on a single thing. The pain was 10 times worse than I had with Teddy. They didn’t gradually build in pain factor either, they were intense straight away!

At about 4:30am Aaron mentioned that maybe I should think about ringing the hospital so I reluctantly did (I was so in denial, it’s laughable). I spoke to a lovely midwife, explained how often my contractions were (every 6 minutes) and she said to ring back in an hour, if I couldn’t speak through the contractions or once they came every 3-4 minutes. Take some paracetamol just to see if that’ll help a little bit *eye roll* paracetamol ain’t helping NO ONE.

About half an hour later it got to the point where I couldn’t breath, talk or move through a contraction but I decided to leave it a little longer as I needed to take Teddy to my mums but didn’t want to ring her too early (STUPID). I suddenly started feeling a lot of pressure in my pelvis and top of my vagina and I instantly panicked – again, not because I thought the baby was coming, oh no, but because I thought something was wrong. I suddenly couldn’t remember the last time I’d felt baby move and started to worry.

I rang the midwife back at 6am and explained that the pains were coming a lot more often, I couldn’t breathe through them never mind talk and I was worried about where the pain was. She again was very lovely and calmed me down through the contractions I had whilst on the phone and explained that I needed to get to hospital as soon as I could.

We made sure we had the last few bits in our bags (that we only packed two days before – imbeciles) & that Teddy’s bag had enough to last him a few days in-case I was in hospital the same length of time as I was with him – LOL – Aaron scooped Teddy up and put him straight in the car. Luckily my mum lives a 2 minute car journey away so we dropped him off. I literally crawled out the car to say goodbye to him and I could have bawled like a baby but the pain was that bad I couldn’t even think about it properly.

Aaron decided this was an amazing time to go to fucking Asda cash machine whilst I’m making what can only be described as mooing noises. We were about 20 minutes from the hospital and I remember feeling a LOT of pressure in my vaginal area and I suddenly felt myself pushing. OH HELL NO.. I didn’t dare tell Aaron because I needed him to not panic or worry so I literally put my hand in front of my vagina as if that would stop a child exiting it.

We got to the hospital at 7:20am and I could have cried with relief. I practically crawled across the car pack shouting to Aaron that something was wrong – he attempted to calm me down and explain we were safe now and everything would be fine. We didn’t bother getting the bags out the car because we obviously didn’t know what the crack would be and I didn’t want to get my hopes up just to be sent home (this happened twice with Teddy and it is the worse feeling) so we eventually managed to get to delivery unit but I literally couldn’t speak but the midwife who I spoke to on the phone greeted us and said they had a room and I could go straight in.

I walked into the room and I couldn’t even get on the bed because it was too painful. I was just stood mooing and swaying before I sort of threw myself onto the bed. I explained the pain to the midwife who would be with me (Francis you wonderful woman) and she said “right we need to get your pants off right now” – okayyyy.. break it to me gently what am I? 2? 3cm?

“The baby is coming right now”… excuse me now what? She had to repeat it about 6 times because I didn’t believe her. No. This baby can’t come early. Not possible. It isn’t due for two days and they will be late. Obviously.

She had to pop my waters as they hadn’t gone naturally (she said it was my waters that basically stopped me giving birth in the car. Yay) and said to push. I screamed that I didn’t know what was happening, the baby can’t come yet  – I pushed like my life depended on it.

About 20 minutes later she said the head was coming and she helped me breathe and do tiny pushes as to try and prevent tearing. Now with Teddy I had a spinal block in theatre for forceps so I was numb as a daisy but with Oliver? Oh no no no. The ring of fire is real and holy shit. I apparently shouted “fucking hell it’s burning”!!! To which Aaron and the midwife laughed. I could have smashed both their faces in – this isn’t a laughing matter people!

At exactly 8am, Aaron announced we had another gorgeous boy – 40 minutes after arriving at the hospital – & Oliver Hudson flew into the world, with his arm next to his head so I did experience a second degree tear. He was put straight into my chest and oh it’s just the best feeling in the entire world – nothing will ever compare.

I was in absolute shock. I hadn’t expected a baby to come. We didn’t have our bags. I hadn’t had chance to tell my sister I was in labour. Nothing. We had delayed cord clamping and I had to have an injection to help the placenta come due to my previous haemorrhage I suffered after my delivery of Teddy.

A doctor then came in and dealt with my tear, I had anaesthetic for that thank Christ. She was down there for a while so I nicely asked if it was okay and she explained it hadn’t torn in a straight line so was just a little more fiddly – nice one kid.

We had the longest feed and Aaron read through some texts from my mum (any updates?) and my sister (WHAT IS GOING ON – MUMS JUST TEXT ME?! And another saying “you’ve got this”. Little did they know he was already here!

About an hour after he was born, Aaron went getting our bags and I hobbled to the shower. I felt so much fresher and myself – albeit still in shock! We then went up to the ward at about 10:30am after the midwife had done all her paperwork, where I would be staying and I rang my family. My mum and sister couldn’t believe how quickly it had happened. They thought I’d gone radio silent because I was too upset at possibly being sent home or not that far on. 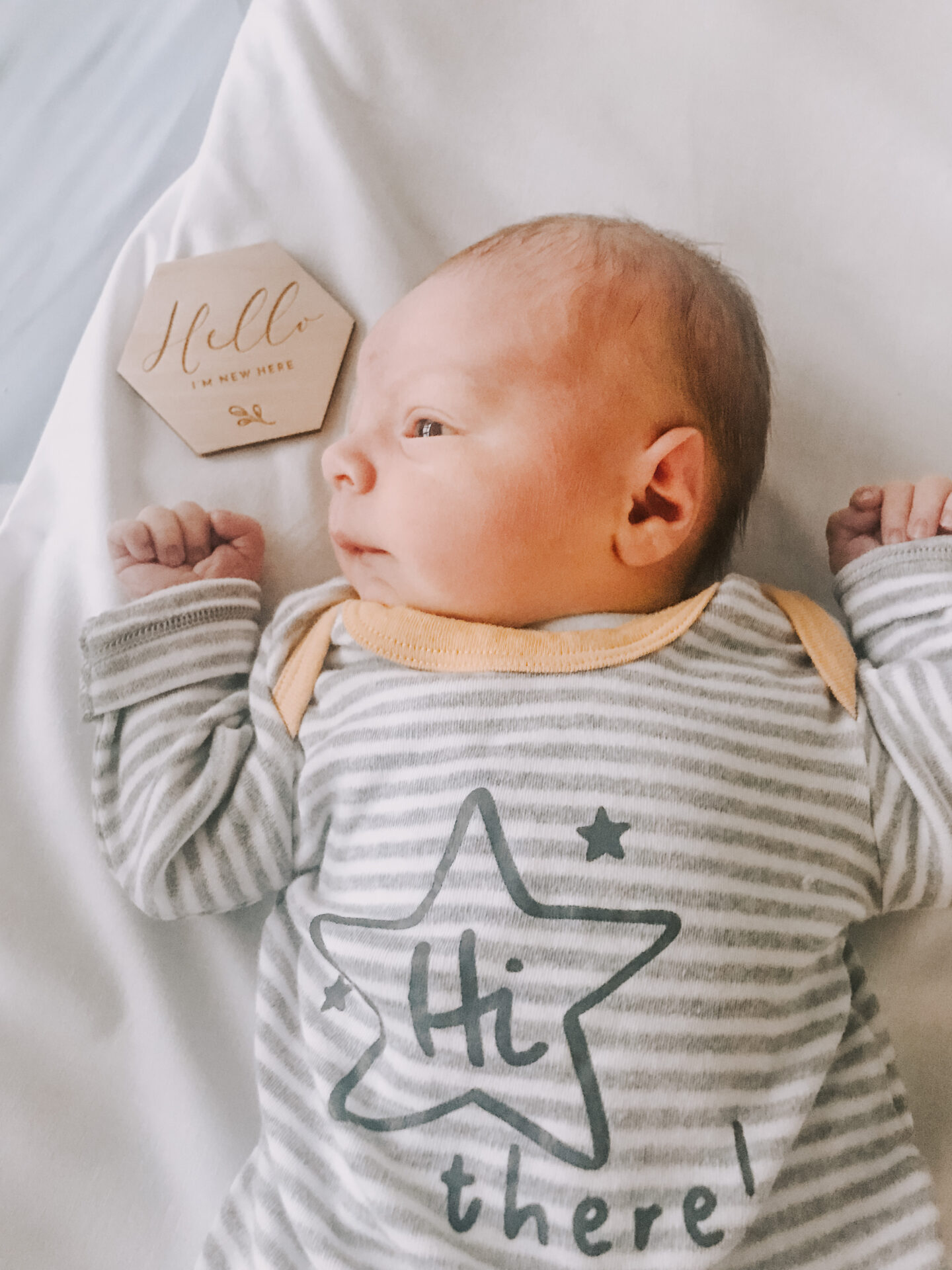 They asked if I wanted to go home later that day or stay in overnight which I did decide to do. My sister suggested I stay, just because you have some real one on one time with your baby that you’ll never get again. I’d go home and be straight into mum mode – sorting Teddy, tidying up. So to take this one day and night to really enjoy my new baby. I’d recommend it to any new mum!

He breastfed like a champ all day, had the sleepiest cuddles and we just soaked him up. It was honestly magic. I felt so much more at ease than I had after having Teddy. I didn’t panic anytime Aaron had to go somewhere – like the toilet..LOL

PHEW i’ll be surprised if anyone is still here, but what do you know.. a lot can happen in a seven hour labour! I hope you enjoyed reading my positive birth story! x